NOTHING ABOUT US WITHOUT US
The Saskatoon Anti-Poverty Coalition (SAPC) is a group of concerned persons and organizations who are dedicated to addressing the causes and effects of poverty.
SAPC meets the first Wednesday of every month from 1 pm to 3. The next meeting of the Saskatoon Anti-Poverty Coalition will be held on October 5th , 2011. Location is the meeting room of St. Paul's Hospital Cafeteria. Everyone is welcome.
For more information about our group, call our office at 955-5095 or email antipoverty@sasktel.net. 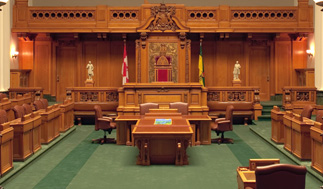 Mr. Forbes:—"Is there, with the government initiative around lean, is there an expectation with housing authorities to embrace that? Or is that up to each housing authority to make up their  own minds?
Hon. Ms. Draude:—... I know that the housing authorities’ members are aware that they are independent. And they are appointed by me, by my office. And so we talk about efficiencies with them, but there’s really no plan right now to do the lean work with them. We’re just working all the time on efficiencies."  p.618

Mr. Belanger: --"... So is it fair enough for me to tell my constituents that we have a new five-year deal,... for the whole province, they are obviously going to be accepting applications for RRAP and ERP, that now is the time to submit your applications? ...  so we can start processing applications right away. Is that correct?
Hon. Ms. Draude:—They can submit applications, correct. " p.622

Mr. Forbes:—"...  social housing, affordable housing, senior housing. Are those still the three main categories of the waiting lists in most of the housing authorities in the large communities?
Mr. Allen:—That’s pretty much the case. Saskatoon, I believe they’ve merged the social family waiting list and the affordable family waiting list under a single waiting list..."
Hon. Ms. Draude:—"... since we’ve implemented the social housing changes, the wait-lists have decreased... previously people could be on a wait-list regardless of their income, and with the changes to social housing, I think the wait-lists more accurately reflect the demand. " p.624

Mr. Forbes:—"... on one hand the rental vacancy rate is a good idea, but by itself it leaves other questions unanswered. And the two questions I would have that we’re often ...  And part of it is maybe not this government’s fault, but the federal government, particularly when they stopped the long form for the census. We don’t have a sense of quality of especially rental housing, a rental unit across the province. We don’t know as well as we might... I’m talking more than Sask Housing units. I’m just talking generally, what is the state of affairs with rental stock in Saskatchewan and also the cost to rent, the cost of rent? And so I would think those three together are a much better picture of what housing is like in Saskatchewan... why is it that cities like Prince Albert have a high vacancy rate? And sometimes, you know, you do have to wonder about ... People have a tough choice about moving into a place that’s vacant but they know has black mould..." p.626

Mr. Forbes:—"But I know people who... were caught in a situation where they were sharing a house with family members and if they left ... It was sort of like a house of cards. Who was the first one to go out to get an affordable place in Sask Housing, but they would leave their brother and their sister in a jam because they were paying high rent. And rent is just simply, in some places, extremely high." p.626

Mr. Forbes:—"...  I don’t think the vacancy rate by itself tells a whole story. But while I am waiting patiently for rents to come down a bit, and we do hear the odd story of that, when we know that some of the large landlords have offered decreases or have flatlined them.
But we’d like to see proof of that too because, you know, your saying so may be accurate, but I sure would like to see it because I think that’s important. And it’s also important in terms of the quality of the housing. Those three together, I think, provide a pretty good snapshot. I don’t think you could roll it all into the vacancy rate, that I mean somebody might assume that you could, you know, a higher vacancy rate implies that people will start to look after their properties. And that may not be the case. So I think that I would urge the ministry to think about expanding their measurements. We have a disagreement on how we might get there.
But I’m patiently waiting for the vacancy rate. Or you know, I mean I do find that CMHC itself, I’m not sure how accurate it is because their measurement is, that there are different things that they don’t measure. And we don’t know, and maybe you do. It would be interesting. Have you taken, do you know what the stats are on overcrowding and people sharing units? Because this is becoming more and more of an issue, of overcrowding in housing units." p.626

Hon. Ms. Draude:—"... what we call portfolio renewal was where we have some single-family homes in Prince Albert, in Moose Jaw, and in Regina. We will sell those homes and replace them with new medium-density homes built in those same communities. So in Moose Jaw we will be selling—actually we’ll be constructing. And in every case we intend to construct first and sell later. " p. 627

Mr. Allen:—"Under the rental development program since 2007, a total of 2,716 units have been completed or are already under construction, so there are a few that are in planning and haven’t begun construction yet. ... So that would average $73,565 per unit. ..At sometimes we’ve gone looking for projects to serve disabled people, so we’ve gone out with a call for units to serve persons with disability. At other times we’ve been interested in a particular geographic area such as Estevan or the North, and we’ve gone with a general call. We’ve gone with calls for seniors in the North and in certain other communities. So it depends on the needs and demands in the province and in a region at a particular point in time. And so that’s what we’ve done in the past and that’s what I expect we will do in the future... " p. 628

Ms. Baird:—"...bedbugs are definitely a growing concern, not just with Saskatchewan Housing Corporation, just with industry at large—hotels and other apartment buildings... we are pretty aggressive when we find cases of bedbugs, and the housing authorities react quickly and get in professional exterminators to try to basically address the situation as soon as possible. But we understand that we need to take a look at some strategies and try to figure out how to do it a little bit better. So we have actually, right now are looking at developing a committee of professionals as well as people within the housing authority system to take a look at this situation just generally in terms of how we can actually address it. And even the industry itself says that the way in which we’re looking at bedbugs may not be, you know, working in the long term in terms of continuing to try to go in there and, you know, do heat treatments and whatever.
So we are looking at a strategy to see how we can do it. A lot of it is involved in providing better education to tenants so that they understand what a bedbug is, that they’re not ... They actually don’t pose a health threat, but they are definitely a nuisance and people really ... They’re very disturbing for people when they do arise. But the big thing about bedbugs is quick identification of them is really the key to ensuring that they don’t spread from suite to suite. But overall that’s sort of what our strategy is right now, and to sort of, as soon as we are aware of them, to make sure that we have professionals go in there as quickly as possible." p. 629

Hon. Ms. Draude:—"I think one of the things that we should be remembering is we have a responsibility to ensure that seniors who need housing, it’s available to them. But we also should keep in mind that right now we have the third-lowest percentage of low-income seniors in Canada. And so we have to ensure that the housing units that we have for vulnerable people are there and in the various communities....One of the discussions that I’ve had recently is where the seniors’ units should be. Most of our seniors are saying, for awhile they’d like to be in their own home; well first of all in their home, which they can do because of home care now. And when they make the move, they’re probably going to move to a location that has a hospital close to it. So that means there could be a shift in what we’re doing. ..So how do we ensure we are supplying the units for the people that need seniors’ units, not necessarily social units?
Mr. Forbes:—... housing is a big issue for seniors and the whole housing continuum for them, which is quite unique and different than our typical housing continuum.  Because at the end of the day,  they’re not thinking necessarily about getting ownership of a detached home...
Hon. Ms. Draude:—I think one of the things that we haven’t touched on that’s important is the whole life lease. Because we do have seniors that do need to have support in their homes, but we also have a group that are not quite ... They can’t buy a brand new house or want to be living in a $300,000 house... we need to make the next step to address the group of seniors who are in the in-between category" . p.629-632
Posted by exquixotic at 14:06 No comments:

nothing about us without us 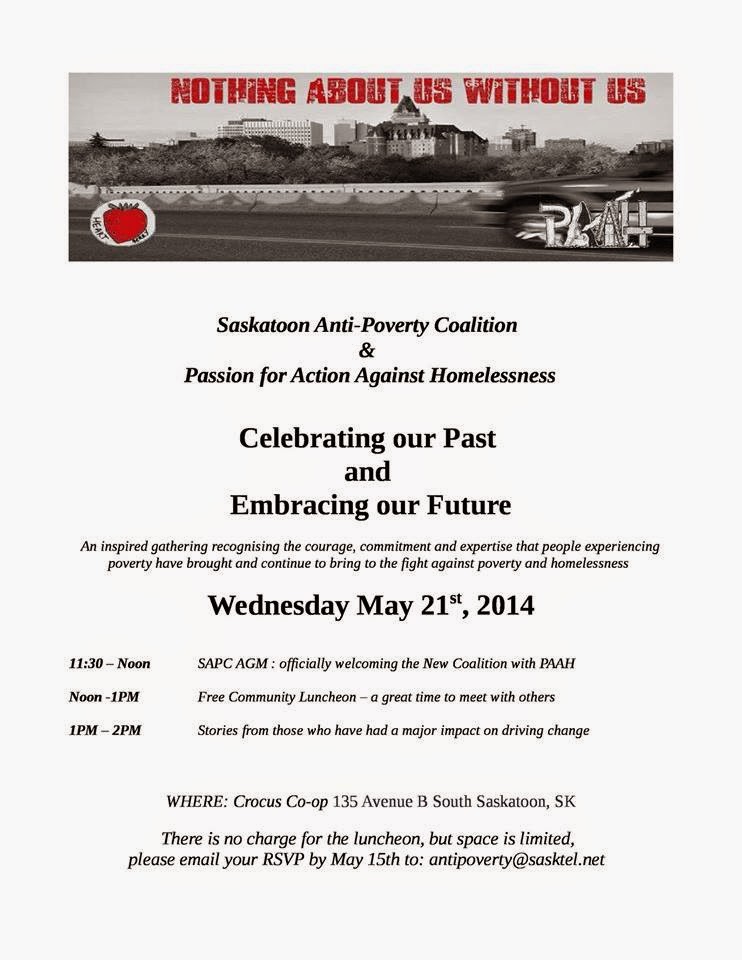 Posted by Saskatoon Anti Poverty Coalition at 10:55 No comments: 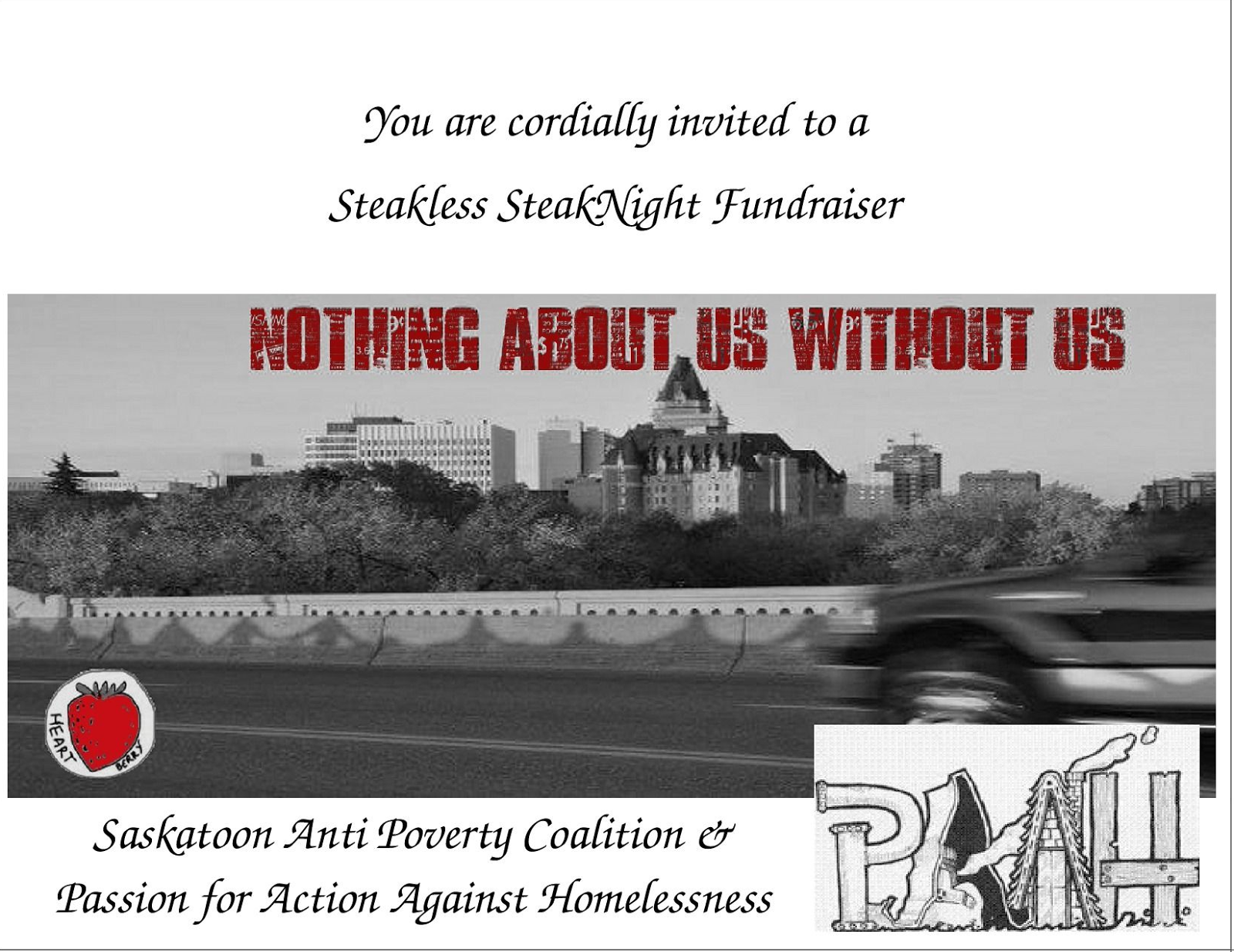 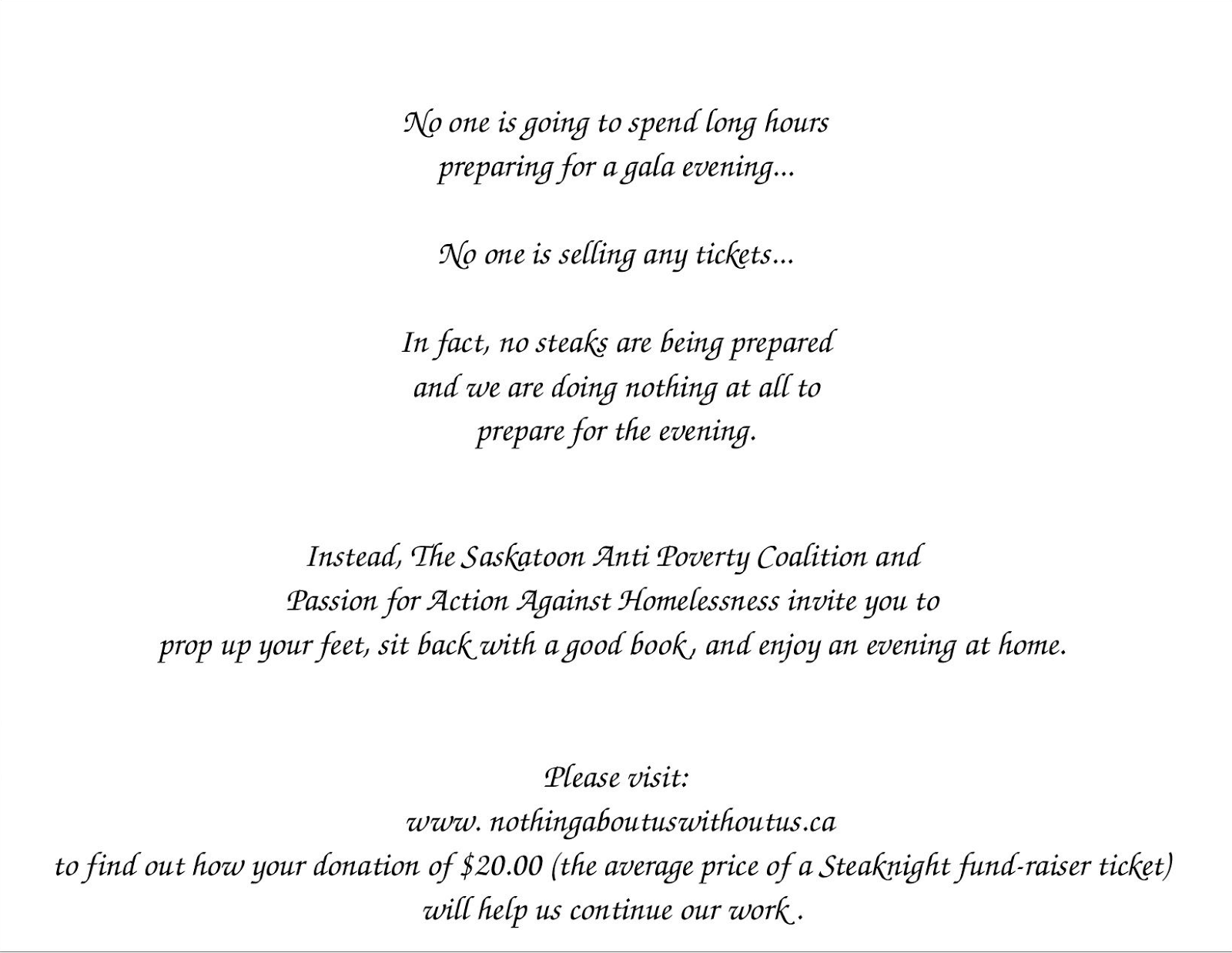 Posted by exquixotic at 12:11 No comments: